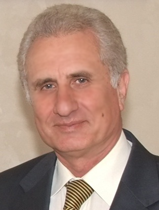 Professor Wajih Owais earned his B.Sc. in Biology from the American University of Beirut, Lebanon, in 1972; his M.Sc. in Biochemistry from the University of Jordan in 1975; and a Ph.D. in Molecular Genetics from Washington State University, USA, in 1979.
Owais started his academic career as an Assistant Professor at Yarmouk University, Irbid, Jordan, where he was promoted to the rank of Associate Professor and then Professor.

He held many administrative positions at Yarmouk University and other public universities where he was Dean of Yarmouk University Faculty of Science, 1994-1998, Vice-President of Jordan University of Science and Technology, 1998-2003, and then its President, 2003-2011. Owais, who currently serves as a Senator at the Jordanian House of Senate, served as the Minister of Higher Education, 2/2011-10/2011 and 6-9/2016, and Minister of Education and Higher Education and Scientific Research, 2012-2013.

Professor Owais served on a number international committees including the Scientific Committee of the Institute of Tropical & Subtropical Agriculture of the Czech University of Agriculture, and the Committee on Science and Technology in Developing Countries (COSTED) branch of ICSU, UNESCO. He also chaired and served on numerous national committees, councils and boards including the Education Council, the Board of Trustees of King Abdullah II Fund for Development (KAFD), the Advisory Committee for Education, Higher Education and Scientific Research, the Advisory Royal Committee for Education Development, Chairman of the Board of King Abdullah I University Hospital, Head of the National Committee for Human Resources Development, Vice-President of HRH Crown Prince Foundation, and currently the Chairman of the Royal Academy of Culinary Arts Board of Directors.

Owais serves as a member in a number of scientific societies such as the Environmental Mutagen Society, U.S.A, and the Jordanian Biological Society.
He was honored with many awards including the “Commemorative Medal” by the Czech University of Agriculture, Prague, and an honorary “Doctor of Science” from New York Institute of Technology also in 2005. Professor Owais is a published scholar with over 35 scientific papers in international Journals. He has also advised and supervised more than 45 graduate students.